D-Day Quotes – Best Inspirational D-Day 2020 Quotes! Today is the 76th anniversary of D-Day, but today’s gathering in Normandy to honor the servicemen who stormed the beaches is much smaller than usual. The coronavirus pandemic has forced surviving veterans and others to stay home. 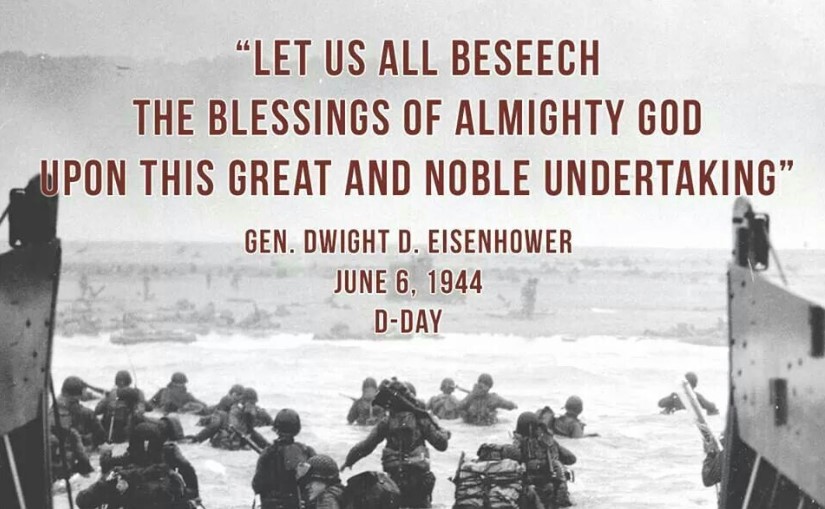 Here below, we are trying to collect the best collection of the Inspirational D-Day Quotes 2020. Just collect them and share them on social media with the #D-Day hashtag.

1. “We’ll start the war from right here.”
–Brigadier General Theodore Roosevelt Jr., son of the former president, who landed with his troops in the wrong place on Utah Beach

2. “If any blame or fault attaches to the attempt, it is mine alone.”
–General Dwight Eisenhower, future president, in a draft of remarks he’d made in case the invasion was a failure

3. “Hitler made only one big mistake when he built his Atlantic Wall. He forgot to put a roof on it.”
–World War II U.S. paratrooper aphorism

5. “So much of the progress that would define the 20th century, on both sides of the Atlantic, came down to the battle for a slice of beach only six miles long and two miles wide.”
–President Barak Obama, 10 years ago, in Normandy to mark the 65th anniversary of D-Day

6. “The waiting for history to be made was the most difficult. I spent much time in prayer. Being cooped up made it worse. Like everyone else, I was seasick and the stench of vomit permeated our craft.”
–Private Clair Galdonik

8. “I don’t feel that I’m any kind of hero. To me, the work had to be done. I was asked to do it. So I did. When I lecture kids, I tell them the same thing.”
–Private First Class Joe Lesniewski​

9. “You get your ass on the beach. I’ll be there waiting for you and I’ll tell you what to do. There ain’t anything in this plan that is going to go right.”
–Colonel Paul R. Goode, in a pre-attack briefing to the 175th Infantry Regiment, 29th Infantry Division

10. “At the core, the American citizen soldiers knew the difference between right and wrong, and they didn’t want to live in a world in which wrong prevailed. So they fought, and won, and we, all of us, living and yet to be born, must be forever profoundly grateful.”
–Author Stephen Ambrose

11. “Today, when people thank me for my service, I figure three years of my time is a cheap price to pay for this country. Nobody owes me a thing.”
–Lieutenant Buck Compton

12. “The first time I saw a poster wanting men to sign up to be paratroopers and heard how hard it would be to make it in, I knew that was for me. I wanted an elite group of soldiers around me.”
–Staff Sergeant Frank Soboleski

13. “There is one great thing that you men will all be able to say after this war is over and you are home once again. … When you are sitting by the fireplace with your grandson on your knee and he asks you what you did in the great World War II … you can look him straight in the eye and say, ‘Son, your granddaddy rode with the Great Third Army and a son-of-a-goddamned-bitch named Georgie Patton!’ ”
–General George S. Patton

14. “I’m very disappointed, and I hate leaving the world feeling this way.”
–Private Jack Port, now 97, on the state of the world currently

15. “It was a different world then. It was a world that required young men like myself to be prepared to die for a civilization that was worth living in.”
–Harry Read, British D-Day veteran who jumped again this week with the British Parachute Regiment’s freefall display team

16. “I cherish the memories of a question my grandson asked me the other day when he said, ‘Grandpa, were you a hero in the war?’ Grandpa said, ‘No, but I served in a company of heroes.'”
–Major Richard Winters

17. “All I could see was water, miles and miles of water. But this was D-Day and nobody went back to England and a lot of infantry riding in open barges seasick to the low-tide beaches were depending on us to draw the Germans off the causeways and gun batteries, and so, as Porter hurled himself against me, I grabbed both sides of the door and threw myself at the water.”
–Private David Kenyon Webster, who became a writer after the war